I have always been a big movie fan. Especially during my varsity years when a bunch of us started an informal Monday night movie club – ah, such hazy memories. But as I grew older and grumpier, I just kinda stopped going to the cinema. No real reason. It was just a shlep. Finally, with the advent of flat-screen TVs, Blu Ray players and an integrated wifi network that lets me stream videos from my PC directly to my TV, the die was cast. The cinematic world was my oyster and I didn’t even have to leave the couch.

So, I became a shut-in and only the occassional 3D blockbuster proved enough of a lure to drag me out into a multiplex. Now, however, I’m happy to say that my love affair with cinema has been rekindled – all thanks to online piracy. Let me explain…

Firstly, I don’t know if you’ve noticed but little old South Africa is now getting the latest movie releases at the same time as major international markets. This simultaneous worldwide release pattern is definitely an attempt to combat all those torrent sites that distribute movies to unscrupulous downloaders as soon as they hit the circuit. By eliminating the lead time between a movie opening in the US and in South Africa, this window is closed and the cinema becomes relevant again. As such, illegal downloads have delivered a much-needed kick in the arse to the movie studios and a boon to smaller territories, which usually had to wait weeks or months for movies to open. Yay illegal downloads!

Secondly, there’s Ster Kinekor’s new fancy-shmancy Cinema Prestige – a pilot project currently running at the Zone in Rosebank. The concept is to create a luxurious cinema environment where each seat is a leather-covered recliner, so you can sit back with your legs up and watch a movie in real comfort. But that’s not all. The Cinema Prestige also has its own private snack counter and, since the cinema only seats around 50 people, there are no queues. Additionally, you can eschew the traditional popcorn and Whispers combo for an innovative selection of upmarket finger foods.

But the most amazing thing about this whole set up is that the price is right. A normal 3D movie currently costs R75 per ticket and a seat in the Cinema Prestige goes for just R85 (R50 with a discount card). That’s R10 extra for a large reclining armchair, civilised snack counter, and lots of personal space. Yes, it’s somewhat expensive but when you consider how much it costs to go to a movie in America, Australia or the UK, it’s a bargain. And I’m totally sold!

I think it helped that my inaugural movie in the Cinema Prestige was Ridley Scott’s outstanding ‘Prometheus’ – a tangential prequel to his beloved ‘Alien’ series. It’s been ages since I’ve watched a genuinely good movie in a cinema, what with the crappy standard of today’s blockbuster fare, but this was a treat: brilliant visuals, superb production design (inspired by Giger’s original concept art), sensitive use of 3D, interesting story, good performances, confident pacing and grown-up editing that didn’t rely on hyperactive smash cuts. Good stuff from start to finish.

Best of all, I watched the entire movie stretched out in a La-Z-Boy! In fact, I had such a good experience, I can’t wait to go back. And that’s saying something for a borerline agoraphobic.

But I am at heart a nitpicking critic, so to finish off this rave review, allow me to offer a couple of suggestions on how to further improve an already impressive offering. Most importantly: head rests. I found that when I tilted the chair back, I needed to angle my neck upwards in order to the screen. So, some kind of pillow on a strap would be an easy add-on, offering neck support and allowing you to rest your head on the back of the seat.

Also, the snack platters could do with a bit of work. It wasn’t bad, just a bit vague. Mine arrived after the movie started and, in the dark, I honestly couldn’t tell what I was eating. I would suggest developing the menu to offer sliders (mini-burgers), nachos, chips and dips – although I’m sure there are logistical problems with food preparation and messy eaters. In any case, this is one area that can be investigated as the concept gains traction.

Finally, amid all the kudos, a word of warning for Ster Kinekor. The key to this kind of thing is maintenance. The cinema and its seats need to be kept in excellent condition. Because now we expect more! So broken chairs, worn leather and shabby carpets will no longer be tolerated. That’s the price you pay for upping your game, unfortunately.

Hopefully, the Cinema Prestige concept will soon be rolled out to a cinema near you. I’ve heard that the audience response has been favourable and the cinema is proving to be very profitable. All I can say is that this is a big step forward in cinema – and it’s all thanks to The Pirate Bay. IMHO. 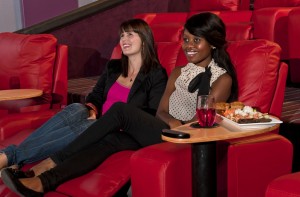 4 thoughts on “Ster Kinekor’s ‘Cinema Prestige’ is a winner”